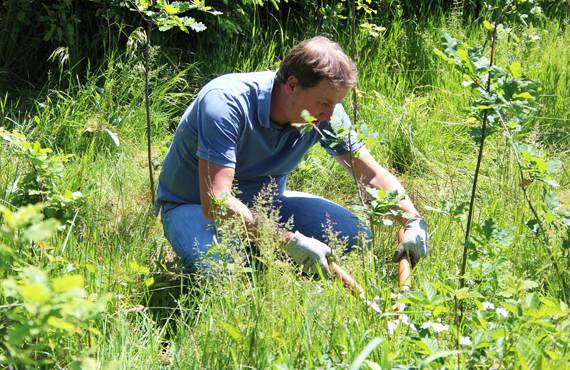 The environment day at sera has been implemented in 2013 with the intention to create added value for people and the environment. As sera is based in Immenhausen, it is natural that sera supports the city of Immenhausen and takes over work the city is not able to cover. Goal is to clean and maintain the area surrounding the sera company site. Furthermore sera wants to get involved and support Immenhausen. All sera colleagues were asked on a volunteer basis to leave their work places by noon to join the environment day.

Besides cleanup in an around the sera company site, the city forest of Immenhausen was cleaned as well: 30 sera colleagues met at the so called Bärenloch on a clearing to free the young oaks that have been planted two years ago from weeds. Equipped with hedge trimmers, scythes and a lot of fun grass was cut and bushes were trimmed. „The young oaks are surrounded by weeds that literally take their air. Therefor we are very grateful that sera helps out and frees the  young oaks“, Philipp Tassius, responsible forest ranger says.

After the work was done, cool drinks and BBQ was offered to all helpers at sera. „It’s a good feeling to get involved and give something back to the city of Immenhausen. Furthermore it was fun working in the forest – a welcome diversion tot he normal office routine“, Stefan Merwar, Head of Marketing an Communication at sera explains. Carsten Rahier, managing partner at  sera adds: „I am proud that we are getting involved together and can really make a difference. Thanks to my colleagues for their great commitment.“