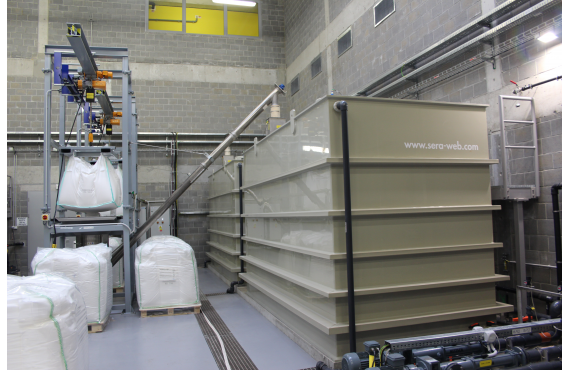 At European level, the Water Framework Directive (WFD/Directive 2000/60/EC) of 23 October 2000 sets out binding environmental targets for all Member States. One of the objectives outlined in this was to put all surface water and ground water into a good condition by the end of 2015. Unfortunately, this has not been achieved in any of the European Member States, including Germany. A new deadline has therefore been set for this important goal and it should now be achieved by 22 December 2021. Cleaning of contaminated wastewater is particularly necessary in this connection to protect European bodies of water from harmful discharges. In order to meet the framework of this Directive, extensions, conversions and new construction of wastewater treatment plants are necessary. In addition to a wide range of the latest dosing systems and technology, sera in particular offers expertise in helping municipal and industrial sewage treatment plants and partners to achieve their goals. A particular challenge was the construction of the new sewage treatment plant in Prague on Císařský island in the Vltava river.

The Czech capital of Prague with its beautiful old town, many restaurants and the castle is a popular destination for tourists from all over the world. In 2018 over 7.8 million people visited the city on the Moldau, which is home to about 1.3 million people. So many people produce absolutely huge amounts of wastewater.

After a devastating flood in 2002 destroyed the existing sewage treatment plant in Prague, it was only partly repaired. Since, however, it was already clear at that time that the existing plant would not be able to meet the future requirements of the population or the strict EU guidelines on water quality, the call for bids for a new sewage treatment plant was set in motion back then. In order to manage this and at the same time comply with the high EU standards, the city of Prague gave the contract for construction of a new sewage treatment plant to a consortium consisting of WTE, Suez/Degremont, SMP and Hochtief in 2011. The construction site was Císařský island in the river Vltava, opposite Prague Zoo. The task involved not only building a state-of-the-art sewage treatment plant with enormous capacity, but also fitting it into the island and the landscape.

The water treatment processes are always the same, irrespective of the size of the plant. This also applies to flocculation of polymers. The calculated capacity of the new sewage treatment plant in Prague was 1.2 million PE (see info box). The largest class of sewage treatment plant in Germany starts at 100,000 PE. So it was clear that the sheer size of the new plant in Prague would be a challenge for all the companies involved. At the beginning of 2015, the long-term partner of sera Hennlich s.r.o. from Litomerice/Czech Republic received a request from Degremont for the supply of eleven polymer preparation units of an appropriate size. sera and Hennlich were able to impress Degremont not only with a cost-effective quotation, but also with their experience stretching over more than 70 years and their expertise in the area of wastewater treatment.

In addition to stations for treatment at 4 m³/h, units for 16 m³/h and 23 m³/h were also required. The tried and tested PolyLine Flow 3-chamber station from sera is available in standard design for up to 8 m³/h. A tailor-made solution was therefore required. Following detailed calculations, the sera engineers established that a scaling of the design was not only theoretically possible, but also feasible in practice. The statics for the new tanks were recalculated and the agitators produced by sera were redesigned. A supply of large quantities of polymer powder had to be ensured, so that the big bag racks and the customised dry material feeders could be supplied. This equipment guarantees an even flow of the polymer powder into the tanks and thus a constant polymer quality. With the inclusion of the re-dilution units, which were also scaled to the necessary flow rates, sera was able to deliver a turnkey system for the customer’s polymer requirements.

Two years after the initial contact and after several hundred hours of calculations, engineering and assembly, the PolyLines and all of the additional equipment left the sera site on four lorries at the beginning of 2017.

Successful commissioning was completed in autumn 2018 and since the start of the new sewage treatment plant on 19 September 2018, four PolyLine Flow 23000 S, two PolyLine Flow 16000 S and five PolyLine Flow4000 S units, including big bag racks, dry material feeders and re-dilution units, have been working reliably and are helping to clean more than 4.1 m³ of wastewater per second in the largest sewage treatment plant in the Czech Republic. The overall costs of the sewage treatment plant ran to EUR 250 million and the integration into the landscape was successful: the architects put large parts of the plant underground and created a park over the top of it, which the citizens of Prague can use as a place for relaxation on Císařský island. The entire project was so successful that it was nominated for the “Global Water Award 2019” as the best wastewater treatment project in the world in 2018.

sera is proud to have been involved in this state-of-the-art project and is looking forward to applying the valuable knowledge gained from it to new projects and to exceeding the high expectations of our customers.